The Mad Dogs actor on Sky's television drama, taking on challenging roles as an antihero, and the joys of being a dad 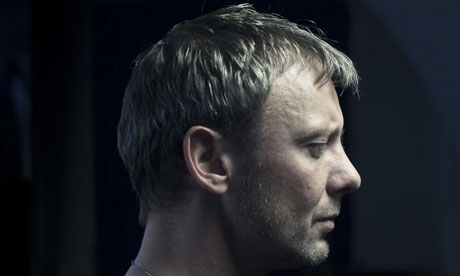 John Simm, who stars in Mad Dogs on Sky1. Photograph: Martin Usborne for the Guardian

On a break from filming beneath the baking Balearic sunshine, John Simm sits on a white plastic patio chair and ponders "second album anxiety". Along with Philip Glenister, Max Beesley and Marc Warren, Simm is back in Majorca making the second series of Mad Dogs for Sky1.

The first – a darkly comic thriller about a lads' holiday blighted by dead bodies, drug barons and a gun-toting dwarf in a Tony Blair mask – was one of the channel's highest-rated and most acclaimed home-grown dramas. It earned a Bafta nomination in 2011 for best serial – but was, perhaps predictably, beaten to the prize by Channel 4's jury-pleasing Any Human Heart.

"Success, however you judge what that even means, brings with it certain pressures," says Simm, "but we were chuffed by the reception the first series got. I was very surprised, actually. Some people hated it – which I half-expected because it was so different from so much else – but they were luckily outnumbered by the people who loved it. You never undertake a project because you think other people will like it – because that way lies madness – but rather because you believe in it. And we believed in this. So it's great that a lot of other people believed in it too."

When the first series was announced all four actors were full of praise for Sky for taking a gamble on the drama, which is made by Left Bank Pictures and executive-produced by Andy Harries, whose past hits range from Cold Feet and The Royle Family to The Deal and The Queen. The success of Mad Dogs has, in their eyes, an added layer of lustre – Simm's Baxter, Glenister's Quinn, Beesley's Woody and Warren's Rick returned for a second run at 9pm on Thursday, and a third series has been commissioned and begins filming in South Africa this week.

"Our decision to go with Sky was vindicated," says Glenister, who also co-starred with Simm in Life on Mars. "If we had made it for the BBC or ITV, we would have been under more restrictions in terms of content, violence and language. That's understandable – it's one of the prices you pay for being on a terrestrial channel – but it wouldn't be the show it is and it wouldn't be the show we wanted to make. Mad Dogs has got much more of a filmic quality to it. In a way, it doesn't feel as if we're making television."

Arguably, the compliments heaped upon Sky are just actors' flannel, flattery designed to charm their current employer, but Glenister and Simm seem sincere. And Simm's reputation means he doesn't need to sweet-talk Sky, or stroke TV executives' egos. He is just as at home in uncompromising grown-up drama as he is in the likes of Doctor Who and Life on Mars and has a CV that reads like a list of some of the best dramas of the past 15 years, from Jimmy McGovern's The Lakes and Paul Abbott's State of Play to Danny Brocklehurst's Exile last year, via Sex Traffic by Abi Morgan and The Devil's Whore by Peter Flannery.

Exile on BBC1 last year, which co-starred Jim Broadbent, was a case in point. "That was proper quality, one of those jobs that you think 'yes, this is fantastic'. Olivia Colman [who played Simm's sister] was just incredible. It was a very, very tough job but I had come off the back of Hamlet [on stage at the Sheffield Crucible] so I was match fit."

If Simm doesn't get at least a nomination for best actor at the Baftas for playing Exile's disgraced journalist who uncovers family and political secrets, there is something seriously amiss, I say. But Simm, who has never won a Bafta, isn't that bothered. "I don't know if you've noticed, but I don't really do awards," he says, archly.

For all that Simm is serious about acting, it isn't just him and his art he thinks about since first becoming a father 10 years ago. "It's not about me any more, it's about my family. Having children is the defining thing of your adulthood and I never want to be one of those dads who isn't really that arsed about seeing his children and is happy to go off for months and months on end. Nor do I want to be one of those actor-dads who drags them out of school to follow me around."

Mad Dogs' relatively short shoots in Majorca last summer meant that he could bring the family out with him during the summer holidays – he is married to Kate Magowan, a fellow actor who appeared with him in 24 Hour Party People and Exile. "When it came up, it was one of those things that made me think 'Why wouldn't I do this?' I've never done anything like it, I'm working with great actors and directors in a nice location, and it's just sounded exciting. I mean – what's not to like?

"You can't start turning down things because you think it's not good enough for you," Simm adds. "You have to weigh up the options and go for it, hopefully without compromising your artistic integrity too much."

Simm doesn't subscribe to Cyril Connolly's view that "there is no more sombre enemy of good art than the pram in the hall", and says that being a dad and getting older have enhanced his life and work. "When I got to 40, I was happy. Now I can wear what I like, listen to what I like, don't have to try and be cool. I'm someone's dad and it doesn't matter any more. That's an enormous freedom."

I ask him if he thinks that part of Mad Dogs' appeal is that, amid the caper and chaos, it's about growing up and what it means to be a man. "Absolutely, it's about friendship. There's something really interesting about having those close friends that you've had incredible times with but growing up and away from them. The underlying tensions, the shifting in the group dynamic, the little lies you tell to big yourself up: it's something that happens to us all."

After he finishes filming Mad Dogs 3, Simm is heading back to the stage, again in Sheffield, to appear in Harold Pinter's Betrayal. He is, he says, "incredibly excited".

"I had an amazing time on Hamlet so it's great to be going back. It was exhausting but brilliant. Twice a day too. At my age. It should be illegal."